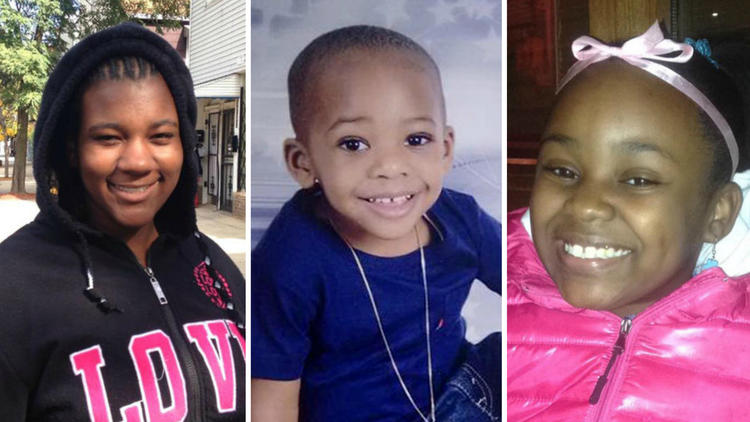 today
later in this service
we will pray for eighteen people
who were killed this past week
due to gun violence within our city.
eighteen people.
just let that number sink in for a moment.
most of those killed were in their teens or early twenties.
many of the murders occurred
within these last few days of unseasonable warmth.
that is a trend in this city:
when the days and nights are hot
when holidays —
even ones as seemingly benign as presidents day —
bring people to the streets —
violence is soon to follow.

three of the people killed this week —
kanari gentry-bowers
takiya holmes
and lavontay white jr. —
were children,
caught in the crossfire
that has become synonymous with the names of places such as
west englewood
austin
north lawndale
chicago’s south and west sides.
they were playing in schoolyards
or riding in the back seat of cars
when their lives were taken.
a twelve year old
an eleven year old
and a two year old —
and their families left behind to mourn.

i begin today’s sermon with this information
because i can’t help but read our gospel text —
one that calls us to “be perfect
as our heavenly parent is perfect”
and recognize that the community we are a part of
couldn’t be further from perfect.

i read a sentence like
“if someone strikes you on the right cheek
turn the other also”
and i can’t help but hear it
through what i can only imagine to be the grief
that the parents of kanari, takiya, and lavontay are feeling
and think to myself

WHAT DOES IT MEAN TO TURN THE OTHER CHEEK???

when innocent children
and women
and men
are shot and killed on their own blocks
and in their own schoolyards,
what does it mean for their families to turn the other cheek?
when the police department in our own city
is under investigation for prejudice against minorities,
what does it mean to not resist an evildoer?
when laws are enacted to implicitly
or explicitly
allow for oppression against people
based on gender, religion, race, sexuality, or ability,
what does it mean to go the second mile?
when people living in poverty
or without access to affordable housing
or in neighborhoods filled with violence —
when they are refused resources for finding a way out
by those elected and charged to serve them,
what does it mean to love your enemy?

what does it mean.
but even more:
how can we be asked to do such a thing?

february is black history month,
and in this time of national turmoil
i often find myself looking
to the esteemed african american public theologians
that came before me,
who spoke on these same issues
and fought these same battles
and asked these same questions
long before i was asking them.

one of the texts i often revisit
is rev dr martin luther king’s
“letter from birmingham jail”
written in 1963.
it was a response to a public statement
published in the local newspaper
by eight alabama clergymen.
they had seen dr king’s nonviolent protests in birmingham
as agitation from an outsider,
inciting violence,
and so they cautioned dr king that litigation in the courtroom,
and other conventional
that is, easier,
methods of justice
were more advisable toward the ends he was pursuing.
obviously, king was having none of that.

after being arrested,
a friend smuggled to him a copy of the newspaper
and in the margins of the clergymen’s statement
he wrote, without any resources,
not even a bible,
one of the greatest defenses of love and justice
to be written during the civil rights movement.
even if you haven’t read the letter in its entirety
you might recognize a famous line from the text:
“injustice anywhere is a threat to justice everywhere.”
from there, dr king continues:
“i cannot sit idly by in atlanta
and not be concerned about what happens in birmingham”
he says.
“we are caught in an inescapable network of mutuality,
tied in a single garment of destiny.
whatever affects one directly,
affects all indirectly.”

in his letter from birmingham jail
much like jesus does in todays reading
from the sermon on the mount,
dr. king outlines his theology of love.
for king
love means action
love means fighting
love means standing up to those who would knock you down,
it means sitting down for those
who tell you to stand up and give your seat over to a white person,
it means refusing to wait for those who tell you that the slow march of courtroom litigation
is the one true path to justice.
as you read this letter
you can feel dr. king’s impatience,
his utter bewilderment and disappointment
at his own colleagues’ inability to understand what,
for him,
was the ultimate message of jesus christ.
“was not jesus an extremist for love?”
he asks,
before referencing some of the gospel
that we read today:
“love your enemies,” extreme.
“bless them that curse you,” extreme.
“do good to them that hate you,” extreme.
“and pray for them which despitefully use you, and persecute you.” extreme.
this love is extreme not just in the sense that it is radical
but also in the sense that it goes beyond:
it goes beyond loving just your neighbor,
and it goes beyond the common laws of the day
which called for retribution and retaliation;
what was called the lex talionis.
“you have heard that it was said
an eye for an eye” —
if someone does evil to you
it is your right and responsibility to retaliate in like fashion.
“but i say unto you
do not resist an evildoer”
do not retaliate
against those that harm you.
instead
“be perfect
as your heavenly parent is perfect.”

it’s easy to hear these words
and take them as an impossible directive:
how can we be perfect?
i mean
wasn’t that the point of jesus in the first place?
to die for our sake because we can never achieve perfection?

when i hear these words, however,
i don’t hear them as a command.
requiring us to be flawless
in the same manner as god.
no,
i hear it as a blessing.
as a reminder.
in the original greek
the word used here to mean “perfect”
can also be used to mean “complete”
or “whole.”
what jesus tells us, then
is that we are whole
when we perform
extreme acts of love.

and in case you think this extreme love is also impossible,
we already know we have this capacity to love —
leviticus reminds us:
“you shall be holy
for i the lord your god am holy”
we already have the love of god within us;
all that’s left to do
is to put it to work.

as we finish this series of readings
taken from christ’s sermon on the mount
it’s easy to see
that this has been the message all along.
jesus has been reminding us
that we have heard things said in a way
that asks us to resist
to refrain from doing something evil:
don’t murder, don’t commit adultery, don’t swear.
we hear this repeated in leviticus as well:
don’t steal, don’t defraud, don’t hate.
resist the evil.
resist the evil.

and again, from last week:
let your word be yes, yes or no, no.
be sure not to mince words,
but whatever you do
do not remain silent.

that evil that emerges from beneath the woodwork —
it thrives in darkness
and lays in wait
until the opportunity arises
for it to destroy the foundation of this temple.
that evil,
that rot
will not go away by simply leaving it in the dark.
and it will not go away if we allow ourselves to retreat into darkness alongside it.
the rot of evil
needs light, air, warmth
love
in order to be overcome,
for us to keep this foundation intact.

elie wiesel,
the author and holocaust survivor
who passed away last year
once said that
“the opposite of love is not hate,
it’s indifference.”
and i tend to agree.
evil doesn’t thrive within hate.
evil thrives within
disinterest, inaction, unresponsiveness.
that is what i hear when jesus says
do not resist the evildoer —
do not simply put up your defenses,
do not simply stop your ears.
instead — LOVE. ACTIVELY.

it’s not easy to greet people
who are not our brothers and sisters,
to love those who actively do not love us.
to go the extra mile when we’re so tired from running this first one.
to give up also our cloak
after just parting ways with our favorite coat.
to offer our one remaining, unbruised cheek
to be struck by the systems that abuse our communities.
and yet we pick ourselves back up
and destroy those systems
through our extreme acts of love.

it’s not easy to be sure
if the love we show is right,
or if the time is right to show it.
and our own expectations of perfection
tend to cripple us and prevent us from showing it at all.
but as dr king reminds us in his letter,
“we must use time creatively,”
that is, to actively create love,
“in the knowledge that the time is always ripe to do right.”
this kind of love is not easy.
this kind of love requires work.
and the work is never finished.

we are not being held up to an unreasonable expectation.
we have not been given an ultimatum.

love is the foundation
of this temple that we inhabit.
and paul reminds us
that in this temple
all things: life, death, present, future
each other
it all belongs —
we all belong —
to us,
to one another.
we are already complete,
perfected,
whole.
and in order to remain whole
as god is whole
we must love even those who would tear this temple down,
we must resist those systems that would tear us apart.

cornel west,
another african american theologian has said
“justice is what love looks like in public.”
the prophet hosea tells us
“hold fast love and justice.”
love and justice.
the two are inextricable

to love
in the extreme
is to resist injustice

“it is love that will save our world
and our civilization”
says dr. king
in a sermon he gave in 1957
on the same verses that we’ve heard today.
“love will save our world”
he says
“even love for enemies.
in the final analysis,
love is not this sentimental something that we talk about.
it’s not merely an emotional something.
love is creative,
understanding goodwill for all humanity.
it is the refusal to defeat any individual.”
he continues:
“when you rise to the level of love,
of its great beauty and power,
you seek only to defeat evil systems.
individuals who happen to be caught up in that system
you love
but you seek to defeat
the system.”

love is the resistance.
to love
to show love
to actively love those who would do evil unto you
in the name of the system they represent —
or those caught up in the system
with no means of escape —
or those children of God destroyed by the systems
by no fault of their own —
to love them
is to resist.

if we are to be holy
let us seek to be whole.
and if we are called to love
let it be in the extreme.